OBi with Google Voice and 911 Working

Posted by faded on December 23, 2012
Posted in: Hardware, Telephony. 5 comments

I was in search of a low-cost VoIP provider to use as a home phone replacement, when I thought about Google Voice. The plus side of Google Voice being that all calls are free within the US, making for a fairly cost-effective phone service. The other factor that I needed to account for was that I needed a solution where 911 service functioned correctly. Google Voice alone will not terminate 911 service, so additional service was required.

Historically I’ve only used Google Voice as my voicemail replacement for my cell phone, which has worked very well. I get emails with transcriptions of my voicemails, and my mailbox never fills up. There’s even a Google app on my cell phone that alerts me to the presence of new voicemails and lets me play them back. There is also a feature that can keep me from accidentally dialing someone by prompting me with one last choice before a call is made of making the call with either my phone, or with Google Voice. Some might find that feature/option annoying, but it has saved me from accidentally dialing someone numerous times.

I went looking for a device that would allow me to use my regular home phone with Google Voice to make and receive calls. A few quick searches pointed me to Obihai Technologies. Specifically the: OBi202 VoIP Phone Adapter with Router, 2-Phone Ports, T.38 Fax – Supports: Google Voice & SIP (Unlocked). Which is available from Amazon for only $72 currently. 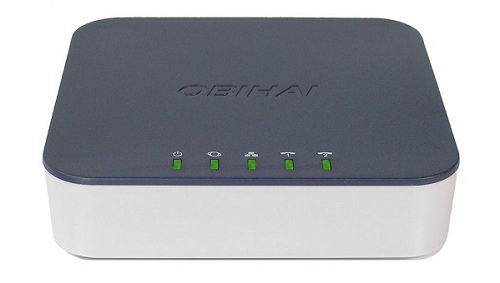 There are some other cheaper models which can do the same base functionality, but i really liked some of the features provided in the 202 model, so I was willing to spend a little more on it.
Setup of the OBi202 was a breeze, although it is slightly different than any other ATA I’ve ever used in that you are provided a web interface on the public Internet to help control and setup your device. Basically, here are the steps I followed:

Setting up Google Voice on the OBi was easier than expected. Basic steps are broken down as follows:

I needed 911 to work from my home phone. After setting up only Google Voice, I tested 911, and it did not work, so I set off in search of a cheap 911 service that I could use. I came across Callcentric, which also happens to be listed in the Service Provider section of the OBiTalk web interface. I was specifically interested in their “Pay Per Call” plan, as I do not want a large monthly fee for something I didn’t intend on using as a primary service.
I ordered the Pay Per Call plan from Callcentric, which requires a $5 deposit, and $3 for setting up the 911 service, and only $1.50/mo recurring charge for 911 cost recovery fee. They have a very nice 911 FAQ oulined here. I was given account information upon order completion, which I quickly plugged into the OBiTalk web interface for the “S2” (service provider 2) section, and checked the box that said “Use This Service for Emergency 911 Calls”. About 15 minutes or so later, I received the email notification from Callcentric that my 911 service had completed activation. I re-tested 911, and this time the phone rang, and I was put through to a 911 operator. I explained that I was setting up a new phone service, and I needed to confirm that 911 was functioning properly. She confirmed the name and address that popped up on her screen was correct. The phone number she read back was not a phone number that I knew, and I didn’t see it anywhere in my Callcentric account settings, or my Google Voice account, so I wrote it down. I confirmed that calling that number from my cell phone did indeed ring my phone, so that if 911 called back, it would get through correctly.

With the assistance of Obihai, Google Voice, and Callcentric, I now pay nothing for local and long distance phone calls throughout the US. I do pay $1.50/month to make sure that I have a functioning 911 service from my home phone.
So far, I’m pretty happy with the results!

5 comments on “OBi with Google Voice and 911 Working”